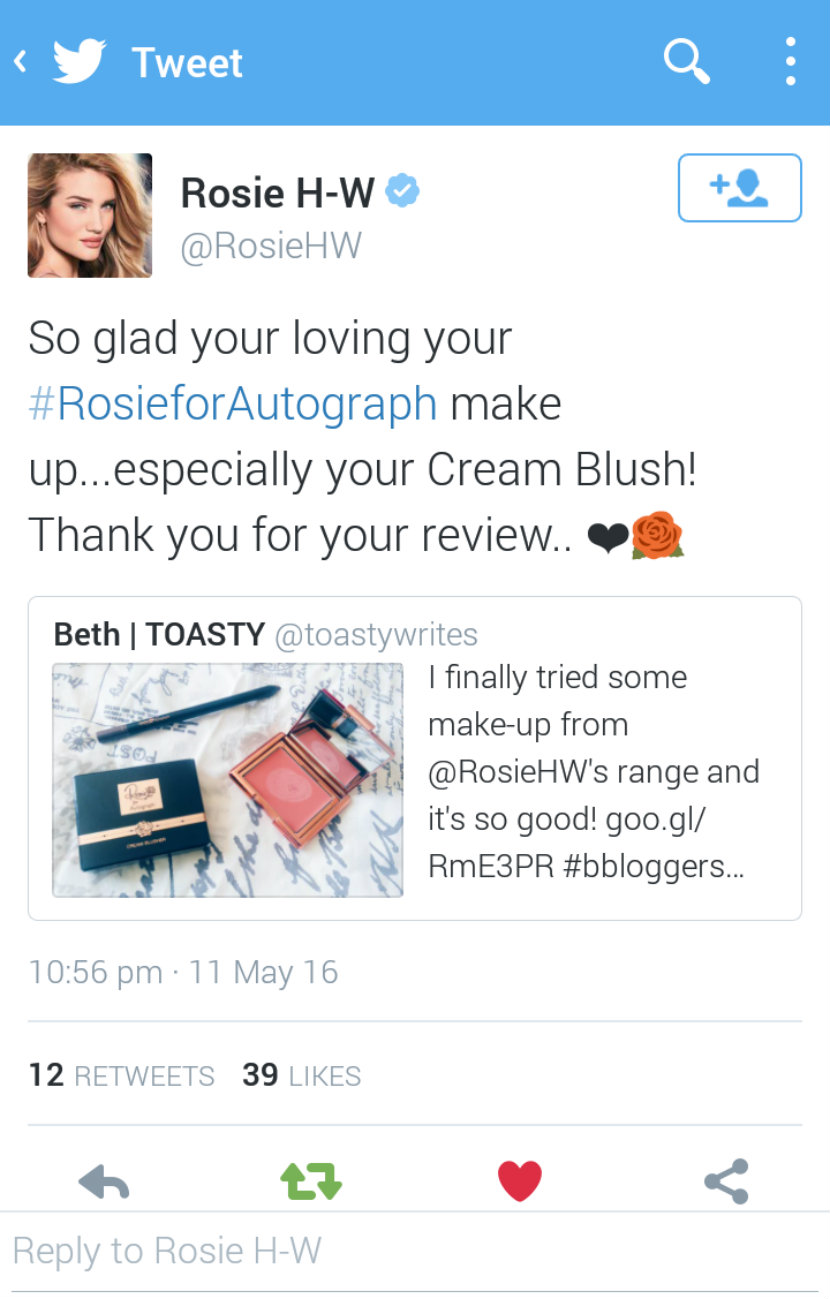 So first of all, this happened! I’d already had a retweet earlier in the day and was thrilled with that alone, so I was over the moon when I saw Rosie had taken the time to read and share my post about her make-up line (which is awesome, btw).

May saw what feels like one of the biggest changes that I’ve ever been through: I left university for good. Saying goodbye to my housemates was a wrench (there were tears) — especially Giulia, who I’d lived with for three years. I’m sure I’ll see my closest uni friends again, but are we ever going to be living in the same town, five minutes away from each other or in the same house? No. Gutted isn’t even the word.

It’s not all gloomy though; we made sure we had a lot of fun before we parted. I’ve explored south Wales, spent one final night dancing like a loon in the student union, had a few barbeques (including one on my favourite beach, Rest Bay at Porthcawl) and more than a few meals out, and just generally enjoyed myself before starting to focus on job applications. I’ve had a couple of interviews already but June will be the month I really get serious about it. Onwards and upwards.

I watched… This fascinating and hilarious conversation between Lena Dunham and Jennifer Saunders, and this video of Joe Santagato and his family playing Watch Ya Mouth, the BEST. GAME. EVER. Also, I finally saw the film version of The Phantom of the Opera. Basically, the Phantom is a manipulative murderer who obsesses over a sixteen year-old, but he’s played by Gerard Butler, who is beautiful and somehow makes a frilly shirt look manly, so I ended up feeling confused to say the least. Have any of you seen it? Thoughts? And what about the theatre show?

I read… Dorothy Koomson’s new book, When I Was Invisible, which I picked up on a whim and finished in mere days. Koomson’s fiction always has such gritty, emotional storylines and she really gets into the heads of her characters, so I’m never disappointed. One to read while curled up on the sofa in the evening.

I listened to… Cheap Thrills by Sia, DOA by Foo Fighters, and Nothing’s Gonna Hurt You Baby by Cigarettes After Sex.

I bought… A couple of bits for my holiday (I’m hoping to do a post once I’ve got a bit more — my wardrobe is severely lacking in summer clothes) and a pair of shoes with an actual heel. A tiny one, but still. Stay tuned to see if I actually make it out of the house with them on.

Product of the Month: Rosie For Autograph Cream Blush in English Rose Flush

How was May for you? Let me know in the comments!

Treats For the Evening, with Yes To Blueberries and Lush