5 Things Every Graduate Gets Sick of Hearing 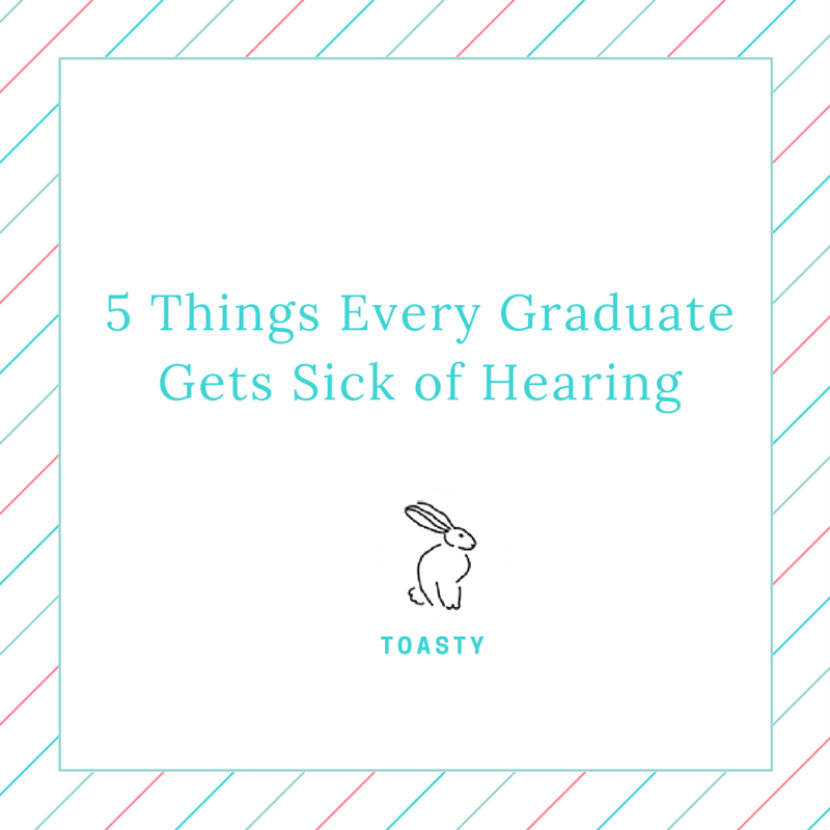 What are your plans then?

This is okay if you’ve got an idea of what to do next, but if you don’t have a clue then this question can throw you into a right panic. I normally say that I’m ‘looking for work’, which is true, but also makes it sound like I’m actively doing something, even if it feels like I’m at a bit of a standstill.

Well, truthfully my dream job title would be Puppy Cuddler but that’s not a thing (Is it a thing? Please let it be a thing!) so now I have to think of something that sounds a bit more realistic and adult, and I just don’t know. I have ideas about the kind of roles that might suit me, but are they the dream? You never really know until you’ve given them a go, do you? And children don’t say they want to be marketing consultants or accountants when they’re younger; they want to be ballerinas and astronauts, and yes, puppy cuddlers.

My sister’s/brother’s/cousin’s child went straight into the workforce after university and has just been promoted to manager at her company. Did I mention that she’s just bought her own house with her fiancé? They got engaged in the Maldives, you should see the ring! The wedding’s going to be very tasteful, blah blah blah…

I have nothing against the sister’s/brother’s/cousin’s child, who sounds like she’s living a fabulous life and good on her, but there’s always one person who likes to brag about their relative’s success and for some reason that relative always seems to have skipped university. Yes, I am aware that you can be successful without a degree, but I chose to get one. It doesn’t make me any better or worse than anyone else.

You’ll have to learn the real meaning of hard work now!

These people always believe the alcoholic slacker student stereotype, which pisses me off no end. I often want to invite them to visit a university library to see how busy it gets and how much pressure we all put on ourselves, on top of the pressure from tutors etc. Sure, a degree is not a nine-to-five job but it’s bloody hard work all the same; it’s just a different type of hard work.

I can’t believe the debt students get themselves into these days!

I live in the South East so chances are the person who’s saying this voted Conservative in 2010, in which case it was your political party who caused the rise in fees and loans, thank you, Barbara, and I had no choice but to rely on Student Finance. I can’t believe the debt either, tbh — it all seems like a bad dream — but that doesn’t mean I want to think about it. It’ll come out of my wage when I actually have one (and earn enough) and that’s all I need to know for the minute.

Has anyone ever said anything like this to you? Is there anything you’d add to the list? Let me know in the comments!

The Vegan Lily Lolo Base

Gold and Bronze EVERYTHING